Mr. M and I packed up the little Mazda 3 and set off on Friday. It’s actually quite remarkable how much can get stuffed into that car – we didn’t have an inch to spare! 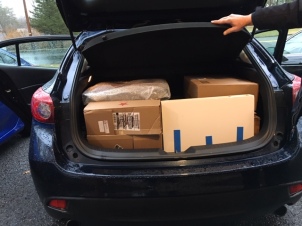 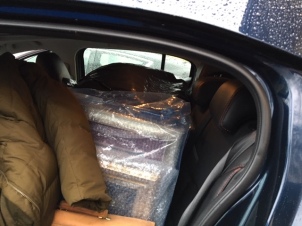 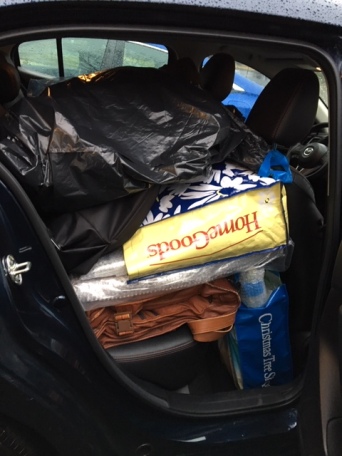 Yes, we did manage to fit in some luggage.  And Mr. M didn’t have to travel with anything on his lap!

Our first stop was Starbucks in Mt. Laurel where we met Melita, who is also submitting a piece to Woodlawn so we added that to the inventory. Melita designs some fabulous pieces and blogs about her various projects at Melita Stitches 4 Fun. Be sure to check it out.

The rain eventually stopped as we were traveling through Maryland. We stopped for lunch at BJ’s Restaurant and Brewhouse in Laurel. I do have a deal with Mr. M – whenever possible we try out a brew pub for lunch on a stitching field trip. BJ’s is a chain that we’ve been to in the past so we knew what to expect. But the food is good (I had a bowl of excellent vegetarian lentil soup that was quite filling) and Mr. M enjoyed the beer.

After lunch we headed to The Waste Knot in Arlington to see the new shop. Last year Lori moved a few blocks from her Lee Highway location to a larger and much brighter shop on Glebe Road. She carries quite a lot of threads and beads along with all the canvases. I did purchase one canvas as well as needles and a couple of small magnets. I had to buy those because I had brought two projects to work on in the evening but forgot needles and magnets.  What a disaster that could have been!

We stayed at the Embassy Suites in Old Town Alexandria, right near the King Street Metro Station. We did make quite a sight as we unpacked a few pieces of luggage and then started carrying in all the needlework pieces.

On Saturday our appointment at Woodlawn was 10:00. In years past we’ve had a 9:00 appointment, in advance of the general public (well, the general stitching public) bringing their pieces in. This year was different – and was probably the most efficient one yet. We were met by Debra K. who is one of the co-chairs of the show and a member of Nelly’s Needlers. Instead of checking in at the front desk, we were led to the other wing for a separate check-in. For those who have been to the Exhibit, we were in the room that houses the Cafe.

They had several tables set up for us; Mr. M and I unpacked all of the pieces and lined them up. Only after all the pieces were unpacked (which itself took about 30 minutes) did Debra start the check-in. She processed the paperwork and examined every piece so that she could note the condition of each, including slight marks on frames, buckling of canvas, etc. Debra was very thorough in her examination and we talked quite a bit about finishing techniques. As we were entering the pieces many of the other volunteers came through and looked at our submittals. As was expected, there were a lot of comments about all the different colorways for Stars for a New Millennium; several people were trying to decide which colorway was their favorite. By the way, we have 9 versions of Stars in the Exhibit.

While we were checking in we did chat with some of the other volunteers. We learned that almost half of the pieces that had been entered were from first-time exhibitors, and there is a notable increase in the number of men who entered this year. I think that’s a great sign for the continuation of our craft!

All in all, the check-in process took 2 hours to get our 27 pieces (by 19 NJNA exhibitors) fully checked in. By that time we felt we deserved a nice lunch, so we headed back to Old Town to The Wharf on King Street where Mr. M enjoyed a shrimp po’boy and I had a lovely she-crab soup and side salad.

We had an early dinner reservation at the Mt. Vernon Inn that evening so we returned to the hotel and sat in the atrium where the lighting was perfect for me to stitch. I managed to get quite a bit of Herringbone Happening stitched.

Dinner was fabulous and I enjoyed a brie appetizer, a large salad with shrimp, and a slice of cherry pie. Mr. M had the turkey pot pie and apple pie. We also were very pleased with a Virginia wine. This was the first time we had been to this restaurant, although we had visited the estate in years past, but it won’t be our last time.

We traveled home on Sunday and made good time – at least we arrived back in NJ early enough to get settled before facing the work week.

We’ll be heading to the Exhibit in early March when Nora is home for Spring Recess. I’m looking forward to seeing all of our pieces! I hope you’ll consider heading to Woodlawn to see the exhibit. It is open the entire month of March (except Tuesdays). There are quite a few events in conjunction with the Exhibit, so be sure to check them here.