As Linda alluded to in her earlier e-mail, a quartet of NJNA members visited Woodlawn today.  All of us were exhibiting so our admission was free!  HA!

As usual, Woodlawn was decked out in needlework glory albeit with fewer entries than past years.  We were allowed to take pictures and I took pictures of all of the NJNA pieces.  I think I’ll hold most of those pictures until later because it is always a fun surprise to turn the corner and discover your own piece in its Woodlawn location.

Here we are with OUR pieces: 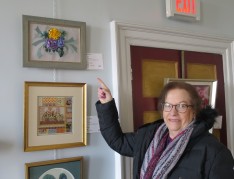 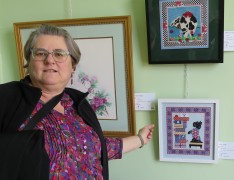 Unfortunately, our SOTM Stars pieces were not hung together.  And we saw one Stars that was not from our group!  Similarly, we were disappointed that Andrea’s beautiful butterflies were not together.  And, we found three versions of Holiday Patches — only one was holiday-themed — and the casual observer would not have realized that they were the same.  Clearly a missed opportunity for Woodlawn.

We saw a stitched version of Beachcomber’s Booty — the Ann Strite-Kurz piece that is being offered by Needleworkers in mid-May.   It was more beautiful than any of us imagined. 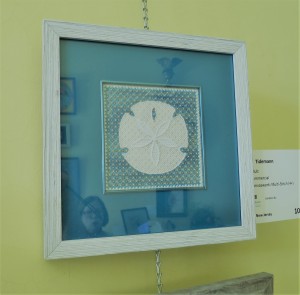 Beachcomber’s Booty — the background is a lovely shade of aqua that none of the photos has quite captured.  One of our group signed up for it on the spot!

Another item that we found fascinating was this sun/moon piece that I know at least one of our members has stitched. 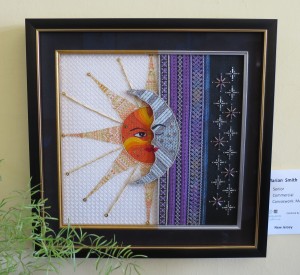 Notice that the fillet is gold on the sun side and silver on the moon side!  Unusual, but apt treatment!

Of course we had lunch in the charming Nelly Needler’s cafe — Sue and I always do a turn around the exhibit, have lunch and compare notes, and then view it all again!  It was such a pleasure to have Ellen S and Janice M join us this year!

It is always a joy to meet so many other stitchers and to see some some amazing creations!  I hope you will have a chance to visit for yourself!

We stopped at Waste Knot in Arlington on the way down,  visited In Stitches in Alexandria today, and plan to stop at Hillside Needlepoint in Stevenson, MD on our way home tomorrow!   And, yes, the credit cards got a workout!

This is always one of my favorite needlepoint adventures of the year!

This is a bit late but I didn’t want to miss the opportunity to share everyone’s progress on our 2018 projects.  Many of the group worked on Lorene Salt’s Autumn Kaleidoscope this year while others continued to work on SOTM projects from previous years.  A few of us finished while others have a little more stitching to do.  We all had a great time at our monthly sessions and will be sharing our 2019 projects.

Barbara finished and framed her Stars for a New Millennium (Tony Minieri Designs) in time for the Woodlawn Needlework Show.

And the roll call of Autumn Kaleidoscope; note that in addition to changing the colors many of our stitchers also varied the borders. 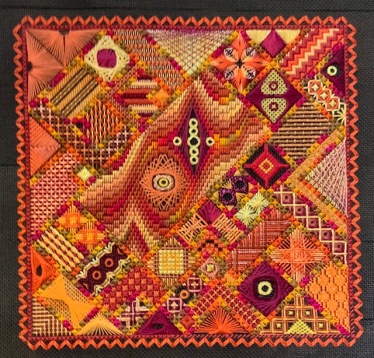 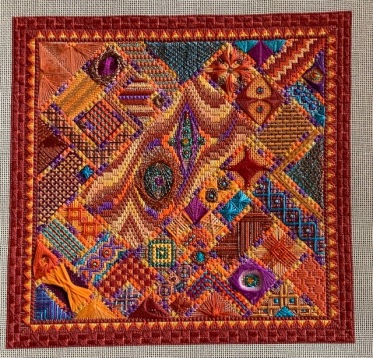 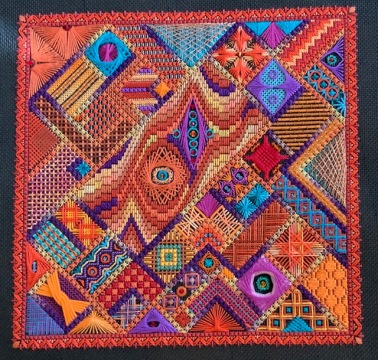 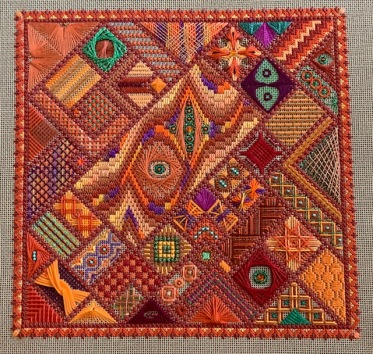 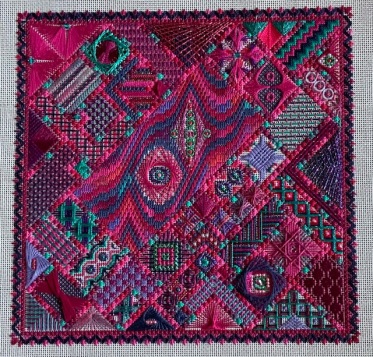 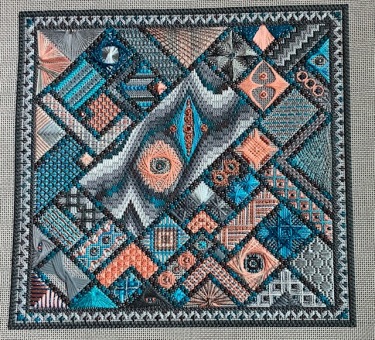 What a great project!  Thank you, Lorene!

John and I took a trip  to Woodlawn last weekend to see the Needlework Exhibit and visit some of the Smithsonian museums.  We drove down Saturday afternoon and stopped outside Annapolis at a wonderful Thai restaurant, Lemon Too, for dinner.  We then went on to Arlington to our hotel.  Sunday morning we went into DC to the Smithsonian Castle, which is the original Smithsonian building.  We took the tour to learn about the origin of the Smithsonian – who knew the benefactor had never come to this country and willed his estate to create a knowledge center in Washington, DC should his nephew have no offspring.  The last of the cherry blossoms were visible on the Independence St. side of the Smithsonian castle.

After a tour of the first floor of the castle, we spent some time at the Air & Space Museum before venturing back to Woodlawn for lunch sponsored by Nelly’s Needlers.  As usual, their lunch was delicious, including the chocolate cake, and I am always happy to give them a nice donation as the ladies work very hard to put on the lunch.

We then viewed the exhibit several times.  John was amazed that every time he walked into a room, he saw something he’d missed the times before.  As others have said, I was disappointed all the SOTM were not together.  Linda’s was displayed near another with a similar colorway (some of the colors were slightly different) and it was interesting to compare them and how the finishing changed them.  I almost missed the one Stars on exhibit, since as you can see the stitcher added an extra border.  Apparently, there was a group doing Stars that didn’t like the “non-square” design so someone told them to add another border to square it up.  It was interesting to hear John’s comments on the piece since he was familiar with mine.  I think this is another instance where the choice of colors impacts what viewers see.

There were a lot fewer pieces this year at the exhibit.  Apparently a finisher who usually showed her clients’ pieces as part of her finishing service stopped doing so a few years back when the cost to exhibit was raised.  I was also told that many of the stores that usually bring pieces from their clients did not do so this year although it wasn’t clear why.  It is even more important that NJNA continue to support this exhibit or it will cease to exist.

I met several people who were part of the local ANG groups, including “the other Barbara L” and spent a lot of time chatting with them.  It is fun to discover camaraderie due to our common passion!  There were also 2 people demonstrating Japanese goldwork, which was very interesting; although I really don’t need more projects!  We finished day off with a wonderful seafood dinner at The Wharf in Olde Towne Alexandria.

Monday we visited the Pope-Leighy house also on the grounds at Woodlawn although it was moved there when Rt. 66 I think was put in and it had to be moved.  This is a Frank Lloyd Wright designed house during his USONAian period.  We had a delightful, well-informed tour guide who spent over an hour with us.  Having viewed Wright’s house outside Chicago, it was interesting to compare this one.  I’m hoping we’ll get to Falling Water later this year for still another comparison!  Both Woodlawn and Pope-Leighy house are owned by the National Trust – very different houses located together.

We then began our journey home stopping at Fort McHenry for a short visit to another National Park.  Unfortunately since we were there Saturday evening through Monday, none of the local needlepoint shops were open.  Possibly, I’ll have time to stop when we drive down to pick up the NJNA exhibited pieces.

While the exhibit is over for this year, I encourage our NJNA members to think about exhibiting next year as well as visiting the exhibit.  It is a wonderful opportunity to see many types of needlework displayed.

I admit to being a little bit late in posting November’s SOTM picture.  The “Stars of the New Millennium” pieces are truly beautiful and most of our group has managed to keep up with the monthly pacing.  Aren’t all the colorways amazing?

I kept the photo big this month so that you can see the incredible detail and notice how the same square looks different based on the placement of threads.

I had decided to do Stars for a New Milennuim for our 2017 Stitch of the Month but was still (and still am!) working on the 2016 SOTM and had not had a chance to get my threads for Stars. I finally decided to do the Jelly Bean colorway after looking at all the overdyes at The Gazebo outside New Hope. I was passing The Gazebo again and only had my thread list (without colors) on my phone so I bought what I could but decided the Tangerine threads listed were too brown for my liking.

Since I had the overdye and my canvas mounted, I decided to start stitching the middle border to see how it would look. I then took a trip to The Edwardian to finish picking my threads since I knew they’d have a better selection of threads and be easier to spread out and decide what I wanted to do. After about 3 hours and with much help from Catherine Curia and one of the workers at the shop (sorry I don’t remember her name), I picked out the rest of my threads.

I had done the center of the first block before our May SOTM and only had a short time available to stitch on Saturday but enjoyed seeing epwhat others were doing and how far they had gotten. I did get one of the squares started around the center of block 1. I was enjoying stitching it so much, I decided to try to finish block 1 this week and did as you can see. 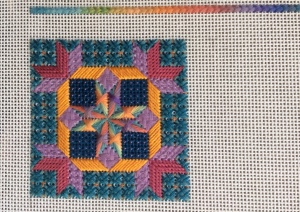 I’m finding this a fun piece to stitch that works up quickly. I’m loving my colors, which are way outside my comfort zone! I hoping the rest of the piece is as much fun and goes as quickly. It’s amazing how different each of the color ways look. I’m looking forward to seeing everyone pieces throughout the year.