A beautiful day in Phoenix. I spent much of it indoors, but it was worthwhile because High Country Winter with Joan Thomasson is a great class. The congress cloth that we received already had the various areas drawn on the canvas. Joan told us that the lines were “flexible” which makes compensation much easier–or not necessary! We started with the water and then moved to the snow banks. We had begun the day painting a piece of ultra suede cloth which will be cut into rocks and appliquéd. She wanted us to begin to appliqué the rocks after the afternoon break, but I wanted to get the water stitched so that the water stitching is under the rock. Trying to make sure that all the canvas threads are covered after the rock is secured I thought would be difficult. When Joan stitched hers, the rocks came after the water. Can you see the outlines of the rocks? 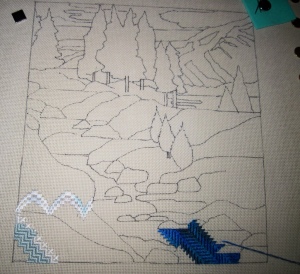 River with some snow

One of the neat things about the directions is that she has a master plan for the whole piece and each section numbered for us. Then she has a page of the same outline with all the rocks colored on two sheets so that we can cut out the pattern pieces for the rocks and still have the master plan intact. There are other sheets with color which I expect we will learn about tomorrow.

I went to the boutique for a very short time this afternoon. It is a good boutique with a wide variety of things, a variety of threads, of accessories, many cross stitch charts (with samples to “sell” them), some counted needlepoint designs and some canvases. The samples make quite an impression and I am sure are selling charts with the threads to accompany them.