As I was writing the previous blogs it dawned on me that I never posted about the third class I started last Fall.  So, here’s progress on another project – Background Sampler I designed by David McCaskill.  The class is being taught by our own Cathryn C at Ridgewood Needlepoint.

This piece is being stitched in Anchor pearl cotton and floss, with a Threadworx overdye thrown in for some interest.  I am stitching in the gray colorway although there are several other colorways available.

There is a back story to this project.  I had originally seen it on a Facebook post and contacted David about getting the instructions for both samplers, choosing the gray canvas.  I then sort of forgot about it.  Fast forward a month or so – Ridgewood Needlepoint posted that they were offering the class.  I signed up for the class although they did not offer the gray colorway (I chose lavender instead).  A few weeks later I got a call from the shop that my kit was ready for pick-up (had to do some pre-work before class).  Wouldn’t you know – that same day I got home to find a package from David with the instructions and gray canvas for both samplers!

I apologize for the picture; I just couldn’t get a good angle on the lighting so it looks a bit washed-out.  We have our third class on Sunday so I’ll try to get a better photo for next time. 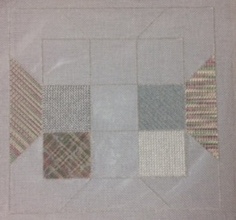