After the rains of yesterday, today was clear, crisp and breezy. Being on the 19th floor we are constantly looking out the window at the river. This afternoon what do we see going upriver but a coal barge. Is it the same one as yesterday? A barge where no one will takes its offering? Who knows.

I began my Out of Africa, Zebra class with Gale Washington today. Class began with a line drawn canvas, a bag of threads that were subdivided by where on the canvas they would be used, an instruction booklet with five beautiful photos showing the different phases of stitching as well as the finished piece. We worked first on the black on the head as she said the head was the hardest part with the small sections of black separated by white. Once I got over the fear of making the wrong decision on exactly where to place each stitch, I enjoyed it. We began the florentine stitching after lunch where Gale explained what she wanted the back to look like as well as the front and why. Tomorrow we start the day with an hour of stitching on any of these sections before we learn something new. I like that idea! Plus we were told not to stitch on our piece tonight. 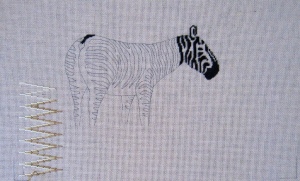 We were not happy with the Express Breakfast offerings–pre packaged bakery products, sausage in a biscuit, but no eggs! We went to the restaurant for breakfast but decided we needed to get foods for the room. Tonight before going out to dinner we stopped at the information desk to ask for a convenience store nearby. There are none! BUT we got directions for the nearest grocery store, Kroeger's, right across the river. It seemed simple enough. We take the Second Street bridge, the same one the barge is moving under, over the river onto what we think would be called a service road or access road for I-65. Fortunately, we never had to get on the highway. We made the left as directed and started looking for Kroeger's on the right. We looked and looked and looked! Just as we pulled into a service station to ask, Rosie spotted the Kroeger's sign. We got our hard boiled eggs, fruit, pop-tarts, raisins. I then went to the customer service desk for directions back as we could never have backtracked the way we came without going the wrong way on a one way road. The man behind the desk began, ran into problems and called someone else for help. A few minutes later we were on our way. Now that is customer service! As we were walking into the store I told her that we were not making this trip daily! Sue