I began the second class today which is much more relaxing than the last class as it is not all new and different. My main challenge in this class is stitching inside the lines, or deciding where the lines are and how to keep those curves smooth. The teacher, Dawn Donnelly, designed this after looking at the polymer clay covered decorative tea pots. So as you can imagine the colors are bright, but not sharp, if that makes sense. Threads are perle, floss, Splendor and Needlepoint Silk. Some class members were saying that they would like bling added and were thinking of ways to add some bling, but I think the piece is cheerful as it is and the colors do remind me of the polymer clay. 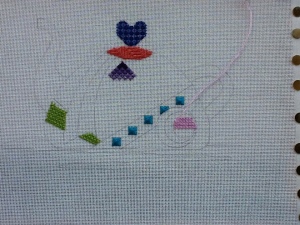 Hot Pot with a few colors

After class today I had volunteered to work in the exhibit area, wearing white gloves and all! What I did was watch to see that no one was misbehaving–touching anything on display–offer to lift or hold something for someone, open a booklet, turn over a piece, etc. there was also a flashlight a available to allow someone to see inside a box or details of a piece. While I was there, a woman asked one of the other volunteers to hold a Christams stocking upright so she could view it from a distance. She told us that she had been a judge at the Philadelphia Seminar (I think it was there) and was looking to make her selection for viewer's favorite. She showed us some of the techniques the stitcher used to create the picture she wanted on the stocking. It was interesting watching her evaluate pieces. There was a small piece of a picaninny in a field in the south. She showed me how the mat in the framing was cut with the bevel going in rather than out so that there was no white showing. It was obvious when she pointed it out that white would have detracted from the piece. The little girl's face was surrounded with a circle of French knots that were larger than usual made with a heavier thread to look like the ends of the corn rows in her hair. I learned quite a bit from her! When I left the exhibit area, she was sitting outside in the open stitching area and we talked about her class which was a notebook class using colored threads on blocks of color painted on a canvas and seeing how the appearance changes with the color behind the thread. It was a good use of color theory that even I might be able to retain if I took that class!

After supper tonight, we went to Expo! For those inexperienced it is a room filled with tables of people selling things to needleworkers which can run from painted canvases to accessories to designs, kits, and even jewelry and then the entrance of hordes of women who want to buy! Rosie and I arrived about half an hour into the frenzy and it was still booming! I did buy a few things. 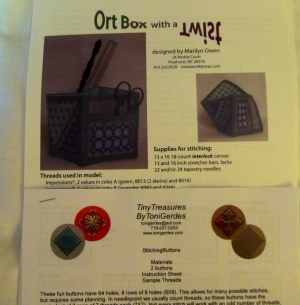 Directions for Ort with a Twist and stitched buttons

As you may be aware, Rosie is the picture taker between us. She has been taking the pictures after each day of class and then editing them while I watched. Yesterday I asked her if she had a special program for the editing. She told me that I could do the same thing with my iPad and she had me try it. I can! So today I took my class photo and did the editing! By the time we got back from the Expo, the room was too dark to take a good photo with the iPad so Rosie was back at work. Thanks, Rosie!