I'm the author of The Turncoat's Widow (Level Best Books 2021), a historical mystery that takes place during the American Revolution. I live in central New Jersey, where my husband and I kayak, hike and sail.
Standard 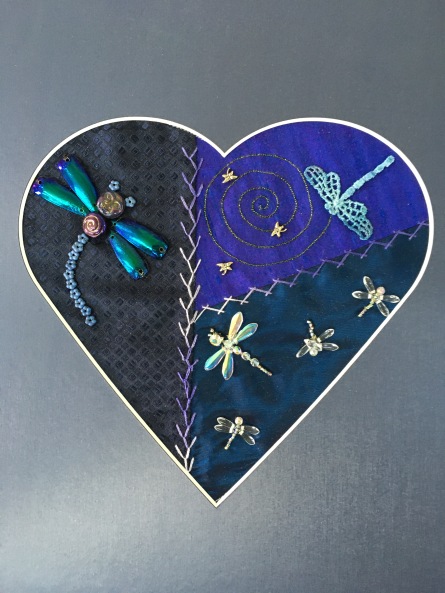 Feel like taking on a new project? Enhancing your stitching skills? Then you might want to stop in at The Edwardian Needle in Fairfield, NJ,  for a class or special event this winter or spring. Here’s what’s coming up:

The New Jersey Needle Artists/Morris County Library exhibit speaks for itself. But we couldn’t leave it at that.

So accompanying the current exhibit of our members’ stunning work, which runs through August 9, is the following brief description of what makes modern needlepoint so challenging, compelling and fun.

Metal on velvet. Exploded geometrics. Bling and more bling. Fiber artists are reinventing this age-old craft — in which stitches are worked with a needle over a canvas mesh — by experimenting with texture, color, and design and by utilizing fibers that didn’t exist a decade ago.

Wool, the traditional mainstay of needlepoint, still has its place. But now, so do silk, cotton, metallics, beads, rayon, ribbons and other fuzzy, shiny, prickly threads. These novelty fibers let needlepointers build texture into their projects. A traditional floral canvas may include flourishes with ribbon to give it dimension. An image of whitecaps on water may be stitched in a metallic thread to give it depth. And as for beadwork, it adds luxury and shine to the handbag worked by one NJNA member and on display.

Artists are using color in new ways, too. Take Stars for a New Millenium, the centerpiece of NJNA’s exhibit this month. Noted fiber artist Tony Minieri, who designed Stars, explains that this project is intended as a “study in color, texture, stitch and thread.” Each square is based on a traditional quilt pattern and, “… is named after a movie star from Hollywood’s Golden Age.”

Stitchers who completed Stars expressed themselves through their choice of color and thread. In the process, they highlighted the impact that color choice has on pattern. While some of the display pieces appear more traditional than others based on color choice, one artist’s decision to use bright pinks, oranges, blues and greens is strictly 21stcentury.

Experiments with new technologies and three-dimensional finishes also mark modern needlepoint. One piece in this month’s display is a needlepoint-embellished photograph. The landscape photo was transferred onto canvas and then worked with stitches to enhance the image and add dimension. And newer types of finishing techniques ditch the frame altogether, giving depth and a playful quality to what’s generally been considered a two-dimensional art. On display here, note the three-dimensional Christmas house, wreath, and red, white and blue piece called Patriotic Topiary.

Then there’s stitch choice. Traditional needlepoint relies on tried-and-true slanted stitches known as “tent” or “basketweave,” and those stitches remain go-to options for most needlepointers. But scores of easy-to-learn stitches are now commonly used to mimic grass, a barn roof, a bird’s wing and other objects on painted needlepoint canvas. And Starshighlights the way in which a variety of stitches can be combined for varied effect.

Want to learn more? First, take a look at the partially-stitched travel ornament included in the display for inspiration. Then head to your library for its supply of “how to” books.  The Needlepoint Book by Jo Ippolito Christensen is a classic. For sheer inspiration, find Kaffe Fasset’s Glorious Needlepointor Beth Russell’s Traditional Needlepoint. Other resources include the American Needlepoint Guild at http://www.needlepoint.org and https://www.thesprucecrafts.com/basic-tent-needlepoint-stitches-2479706. YouTube also contains a wealth of information on how to prepare a canvas and specific stitches. Free beginner patterns are also widely available on the web. Here’s one pattern that offers clear instructions and a variety of stitches: http://www.lizartneedlepoint.com/uploads/Rhodes_Fish_Cover___Text.docx

The Edwardian Needle in Fairfield, New Jersey, is offering some fantastic classes this spring and summer. So if you’re looking for a new project or a new skill, consider signing up for the following:

We’ll keep you posted about new offerings at other local needlepoint stores in the near future. In the meantime, happy stitching.

“What’s that?” I asked Andrea over the din of last year’s Needlefest.

The room was large, noisy and yet cozy with stitching friends catching up on news and projects. She and I had sat next to each other, and I couldn’t help but notice the pliers she extracted from her project bag. She turned her small needle nosed pliers one way then the other for me to admire and explained that she used the tool to pull the end of threads through stubbornly tight stitches on the back of her canvas.

A relative newcomer to stitching, I loved the idea that I could raid my husband’s workshop to improve my needlepoint. (He’s been smart enough to ignore the occasionally borrowed pair of pliers ever since.)

And recently I wondered what other hardware, drug and office supply items my stitching friends were using to up their needlepoint game.

So I asked them all at our most recent “Stitch of the Month” session. The answers came fast and furiously:

To pull the ends of stubborn threads through stitches on the back of your project, try hemostatic forceps, needle nosed pliers, tweezers or a one-to-two inch square piece of nonskid rug pad material.

A meat mallet can help you assemble a wooden needlepoint frame. To protect the wood, place a pot holder on top of the spot you’ll be pounding.

A pill case like this one – https://www.travelsmith.com/product/am-pm-vitamin-pill-case.do– can keep needles organized, which is especially helpful if you’re carrying multiple types to class(es).

To straighten out neon rays and other “kinky” fibers in a flash, use a small flat iron. If you’re planning to use the device throughout a stitching session keep everyone safe by resting the flat iron in a mug.

To hold multiple threads as you work, gently attach magnetic paper clips like these – https://oliblock.ecwid.com/Small-Magnetic-Clips-c22190385 – or quilters’ clover clips to the edges of your canvas.

An industrial C clamp can be used to attach your project to a table and stabilize it while you work.

I’ll take the blame for including this last item, which finds a place here mostly because I never expected to hear these three words uttered together: magnetic; bingo; and, wand. Yep. If some of your needles are MIA on the floor, try sweeping an inexpensive magnetic bingo wand over your rug. It’s a thing.

Thanks especially to Margaret, Linda, Rosie, Jill, Sue, Marge and Amy for sharing this information.

Needlepoint makes me feel creative, peaceful and … ok, I admit it … sore. After an hour or two of stitching, my back, shoulders and neck start to rebel.

So I asked my friend Laura, a brilliant writer, editor and certified yoga instructor, for advice. With her own long sessions in front of a computer, I figured that she shared some of our pain. Neck pain, that is.

I was right. Laura was happy to pass along some thoughts on yoga poses that might relax “up tight” stitchers.  Here are her recommendations:

Neck rolls. Perfect for the tightness caused by looking down at a project. (Try the other stretches listed in the article linked here, too. The chair twist is my favorite.)

Extended puppy pose. Laura explained that this pose is a gentle way to open the shoulders and upper back.

Child’s pose. This pose helps with tightness in the lower back and hips, which is common when we spend a lot of time sitting.

Not every pose works for everyone, of course. Try out the one(s) that interest you, and, if you have your own Rx to loosen tight “stitching muscles,” share your tips in the comment section below.

In the meantime, Namaste, y’all.

Almost 80% of all New Year’s resolutions go by the wayside before they’re achieved. In fact, most of us give up on our resolutions by January 12.

All of those pesky lose-weight, get-in-shape promises are such a bore. And, really, you’re fine the way you are. As a matter of fact, you’re wonderful.

So why not do something radical this year: Resolve to do more of what you love.

Do. More. Needlepoint. Find a new canvas or stitch. Retrieve one of the few unfinished projects in your closet. (“Few” is a relative term.) Or resolve to take a class.

Our local needlepoint stores have offerings to help you stretch your imagination, play with new techniques or stitches, enhance your skills, and make new friends … all of which are more fun than eating celery or getting up at 5 AM to jog.

Here’s what you’ll find at the fabulous needlepoint stores we all frequent:

Knit One, Stitch Two in Pennington will offer The Gazebo – a red, white and blue canvas with a gazebo, topiary and flags – as a “stitch along” on February 11 (11:30 AM – 1:45 PM) and February 28th (11 AM – 2 PM). A stitch guide will be available.  Stitch Along fee $25. This is not a class. Minimal instruction is included, and attendees must be able to stitch basketweave. If you’re interested, please email me for the project photo (I couldn’t post it) or contact the shop at http://k1st2.com.

I’ll post information about additional classes upon receipt. In the meantime, happy stitching!

There’s something about the hot weather that makes me want to pick up a book or three. Maybe it’s that leftover feeling from childhood that summer will last forever, that there’s time enough for everything, even reading for pleasure.

So at the last NJNA chapter meeting I asked some of our brilliant, talented NJNA members for their summer reading “picks.” They were generous enough to share the following recommendations.

If you have favorite books to share, let us all know by commenting below.