Before I get into today’s events, I thought I would share with you my end of Tuesday progress on Tudor Garden!

I venture to say that I would have had a bit more done if I hadn’t missed a whole stitching session for a conference call!  This was a fun stitch and as a result of being in the trial group for this distance learning, I earned a free registration for next year’s seminar!  Good thing I planned to go to New Orleans anyway!

Wednesday is always one of my favorite days at seminar — it’s tour day!  Unfortunately, ANG has not had a lot of people sign up for their sponsored tours which I think is a shame since these are both a cultural experience in the seminar region and also a great chance to meet stitchers from other parts of the country!  So, this morning, I boarded a bus with about a dozen other stitchers and we drove about 1.5 hours to the Hopsewee Plantation for a Tour and Tea.

The Hopsewee Plantation House dates to the 1700’s, before the Revolutionary War.  The owner at the time was a delegate to the Continental Congress and was a signer of the Declaration of Independence.  When the house was built, the area was known for growing rice and the rice plantation owners were quite prosperous.  They kept slaves and I was able to walk through one of the slave houses on the plantation.  I tried to imagine what it was like to live there, but I couldn’t.

The plantation house itself is small (by cotton standards) — four rooms on the first floor and four rooms on the second floor.  Each room had at least four windows and breezeways connected the rooms to allow some minimal cooling of the house.  Many of the windows and some of the furniture is original to the house.  Today’s owners still live in the house and maintain its charm while still finding a place for their computers and big screen TV!  It really was special to know that you were touring someone’s home!

Our tour was extra special because it was conducted by the previous owner’s daughter — she grew up living in the house and had many wonderful stories to tell us!  I very much enjoyed hearing about a prior matriarch of the house trying to move a piece of furniture through a door.  When it wouldn’t fit, she took an axe to the door sill!  Our guide learned this from a family member of another former owner who happened to come on one of her tours!!  How fun is that?

The grounds were beautifully kept and I took several pictures of especially wonderful foilage.

A Coleus — I wonder if it is related to the Croton from my Saturday and Sunday class? 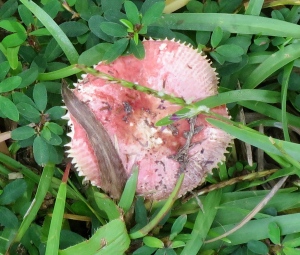 An unusual and colorful mushroom! 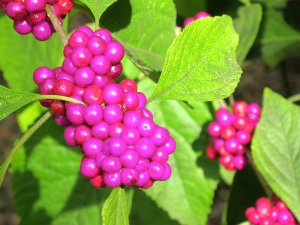 I have no idea what these berries are, but aren’t they luscious in color?

The tea house is on the property but in a separate building.  We had three pots of different tea blends, cucumber and boursin cheese sandwiches, quiche, salmon mousse on water crackers, curried chicken mousse on ginger snaps, and mozzerella, pesto, and tomato on meltaway crackers!  Then they served your choice of two of three kinds of scones!  We thought we were finished but then came dessert:  cheesecake, no-bake chocolate cake, lemon tarts, and a chocolate covered strawberry!  What a feast!

Tomorrow we will brace for Hurricane Joaquin!