Last weekend I had the privilege to stay with friends on the beautiful Georgia island of St. Simon’s. On our way to sightseeing on Friday morning, we passed a shop that just called out to me.

The Stitchery on St. Simon’s Island.

The store was lovely and inviting on the outside.  The owner was off and so I wasn’t able to take a picture on the inside.  The stock was mostly yarn for knitting, but there were a number of painted canvasses.  I asked about stitch guides and was told that I was supposed to do those myself!  I found one needlepoint of the lighthouse on St. Simon’s, but that appeared to be the only local interest canvas — so I bought it! 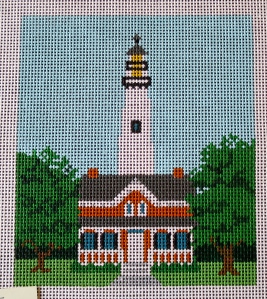 What do you think?  I thought it was pretty realistic. 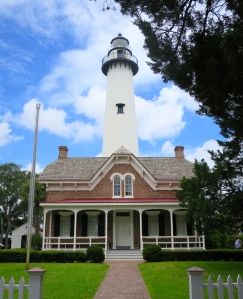 My recommendation for stitchers going to SSI?  BYOS — Bring your own stash!