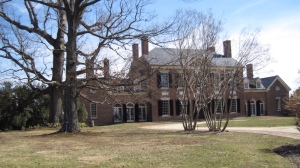 Woodlawn on a Sunny Day

I hardly know where to start and what to leave out. First of all the “Frankies” designed by Michael Boren that were stitched by NJNA were on display on one wall in one room on the second floor. They were spectacular all seen together. There was also another Frankie by someone else on the same wall that completed that set. It was wonderful to hear the comments of visitors as they came in and saw them all in such a variety of colors. We had three winners in our group, Rosie L. took a second place, Linda M. and Sue C. both took an honorable mention in the multi stitch canvaswork. I was told that Michael Boren was told of this display. It is hoped that he will be able to see it.

Looking through the catalogue of stitchers, I saw that Barbara L. had three pieces entered. Two were very pretty pillows displayed in the parlour on a sofa. Barbara's third piece won a third place in the multi stitch canvas work, but I was never able to find it! I had the help of three friends and several docents but no success. Before returning next week, we need Barbara to tell us what we are looking for. Congratulations to all exhibitors from NJNA! In the smocking room is the second piece that Kathy M. exhibited, a lovely dress with a smocked white bodice attached to a taffeta skirt and attached apron. It was so pretty.

You will see several renditions of the Debbie Stiehler's 2013 STOM. One is made into a large flower with beads along two edges standing in a flower pot! Kurdy Biggs has two pieces on display for those of us who like her designs.

For those who will make a visit to Woodlawn this year there were some beautiful pieces with wonderful stories to accompany them. In the parlour is a surface embroidery piece that borders a piece of fabric with Hebrew script on it. I asked the docent if the “story book” had any information on the quote. It came from the book of Proverbs about the role of a woman that is quite heart warming. In the first room off the entry room are a number of miniatures and beadwork (fascinating all). One is a beaded purse with both shells and stones encrusted. The woman who made this missed a family trip to Florida because she stayed home with a son who had mono. She asked her daughter to bring her home shells and stones that she found on the trip. These are what she put on her purse. Each room has stories and the docents have the notebooks of many. When you are in the parlour, ask the docent which is the piece stitched by the lady who is 100 years old! (Oh, to still be stitching 25 years from now!)

You will recognize Susan H.'s sheep on two pillows in your wanders. There is a canvas work clock using beautiful buttons in place of the numbers. There are several pieces of animals and birds that must be Charlie Harper canvases. There is an original land grant document for land in Alabama signed by James Monroe framed with a reproduction of a sampler from the family. These have stayed within the family from the mid 1820's!

I could go on, but I want to tell you that lunch in Nelly's Tea Room is a worthwhile visit. The food is good; any money made (including tips) supports the Woodlawn Plantation. 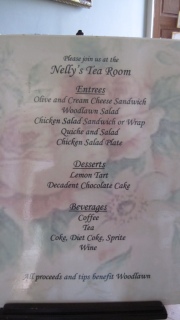 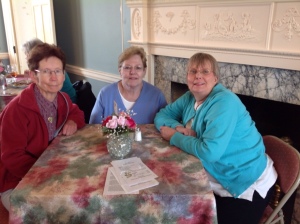 Three of us ready to order

I am so glad that I will be returning next week!